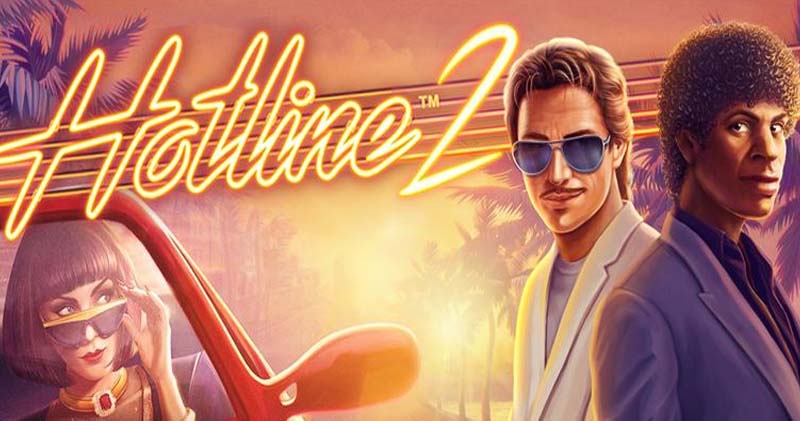 The Swedish online casino software provider, NetEnt, has rolled out a new game in its Hotline slot franchise. Hotline 2 slot takes players on a wild return to the hot streets of Miami in the 80s. If this game reminds you of the American TV crime drama, Miami Vice starring Don Johnson and Philip Michael Thomas, you’re right on target. The guys on the reels look strikingly familiar!

In Hotline 2 slot, NetEnt uses the popularity of the original game to leverage the new title and it’s clear that they’ve been successful in their attempts. Both games boast the same Miami-at-twilight backdrop and a retro, 80’s soundtrack, however, the soundtrack in the newer version is much better overall, and is a big part of the game’s appeal. Players are already saying that, in this case, NetEnt has vastly improved on the original, to bring us a sequel worthy of hours of play.

This is a 5 reel, 3 row video slot with lots of bonus features to keep things at boiling point – both in terms of entertainment and rewards. The game that is based on the 243-ways-to-win format. In order to land a win, you’ll need to match symbols in any position on three or more reels.

You can bet anything from 0.30 to 150.00 per spin, and if you want to sit back and relax to simply watch the action, run the Autoplay function for 1,000 autospins. Another cool feature of Hotline 2 slot is the Turbo Mode where the reels will spin even faster.

There are three bonus features to enjoy:

Hotline 2 slot has a RTP of 96.05%, which is pretty standard fare for NetEnt video slot games. It’s slightly lower than the original Hotline slot (97.04%), however winnings come more frequently thanks to the greater number of bonus features.

The most you can win in this game is 5,184 x your total stake on each spin! Hotline 2 can be played on mobile or download platforms at NetEnt-powered South African-friendly online casinos.