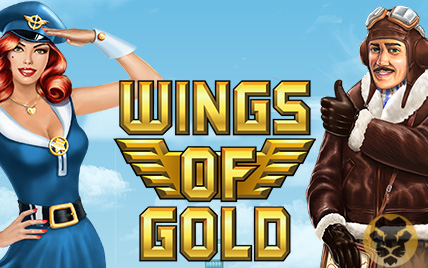 It’s always a celebration when the iconic online casino software provider, Playtech releases a new game title, and this time, it’s no exception. Playtech’s new Wings of Gold slot has swooped into online casinos that are powered by this group, and already the reviews are proving to be very good. What makes Wings of Gold Slots so interesting is that it features an interesting historical World War theme, but incorporates one of Playtech’s futuristic features, the XtraWin feature, which adds to the winning potential.

🎰 Wings of Gold Slot – The Basics

Wings of Gold has 5 reels and 20 pay lines. The theme is proudly military, and there’s lots of aerial action taking place on the reels.There’s a good range of bonus features, including the usual wilds and scatters, as well as a dedicated bonus game and a top jackpot of 60,000 coins.

🎰 Where to play Wings Of Gold Slots ?

Scatter symbol: The Wings of Gold logo serves as the scatter symbol. If you land at least three of them in a spin, you’ll be able to take home a cash prize that is multiplied by the size of your total bet. If you are lucky enough to land five scatter Wings of Gold logos, you’ll unlock the maximum scatter payout of 100 coins.

Bonus game: But that’s the only reason that you will want to add the scatters symbols on the reels. This symbol also triggers the Medal of Honor bonus game. When this game begins, you are asked to choose a medal from those displayed on the screen. Depending on your choice, you’ll be able to win between 15 and 100 free spins! That’s a very impressive number of free games to win in a game and can certainly go a long way to increase your winnings on the reels. In addition, if you land the Wild symbol during the free spins, you get to double your winnings. The wild symbol can also appear as an expanding wild.

XtraWin Feature: This is one of the main reasons why we love Wings of Gold slot. We were first introduced to the feature in Pharaoh’s Secrets slots, and this time it makes an appearance in Wings of Gold. In order to trigger this feature, you’ll need to click on the XtraWin logo when it appears on the game’s screen. It’s worth pressing the logo just to enjoy the fantastic animations. Playtech players get a real treat with the five fighter jets that zip across the screen. It’s worth noting that you’ll be charged 50% of your bet in order to activate this feature, which can be done at any time.

🎰 How to Bet on Wings of Gold Slot

You can choose to bet on anything between one and twenty activated paylines. Interestingly, Playtech only makes three wager sizes possible – 0.20, 1.00, and 5.00 credits. You’ll start getting payouts when landing just two of a kind of certain symbols on a payline, although there are definite wins on four of a kind on practically every symbol – from the number nine (20 x) and up until the Co-Pilot symbol (1,000 x). A top line bet of 5 credits will pay out a 25,000-coin jackpot. Play the new Wings of Gold slot at South African facing Playtech powered online casinos.