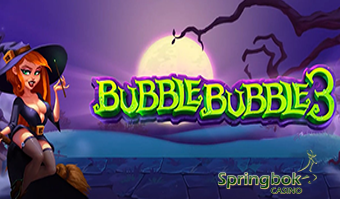 They’re back! The cutest witches in the world of online gambling return to gaming sites next month. Players first met Winni, Willow and Wanda on the reels of the original Bubble Bubble slot by Realtime Gaming, and the trio of witches returned for a second time on the sequel to this magnificent game.

Now, RTG has announced that the third installment of its online slots series, Bubble Bubble 3, will debut at Springbok Casino on October 13th, much to the delight of South African online gamblers. It’s worth noting this date in your diary so that you don’t miss out on the launch date of this long-anticipated third game in the popular RTG Bubble Bubble trilogy.

Players will be treated to new bonus features, which means that the original, fun and highly popular theme has been retained but the third slot has enhanced winning potential and an entirely different play experience.

Get awarded nine free games and watch each witch cast her spell. If a reel is struck by the spell, it is turned into the witch which cast the spell and payouts explode. With a bit of magic, you could be looking at 33 free spins.

Three spins are awarded, and the triggering Crystal Ball symbols are held in place. If any of the three witches make up the trigger combination, they are changed to Crystal Ball symbols before the respins begin. If any more Crystal Balls land, they are also held in place and the whole feature resets to three more respins. At the end of the respins feature, players get paid out their prizes. If all 15 positions have been filled, the Grand Jackpot is paid out.