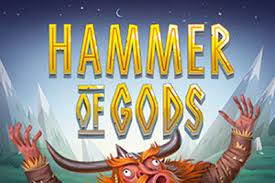 The online casino software vendor, Yggdrasil, announced that it has launched its fifth title together with its partner games studio, Peter & Sons. In a press release this week, the two parties that that they have “embarked on a fearsome quest in search of giant wins in new release Hammer of Gods”.

The new release is part of Yggdrasil’s YG Masters program,whereby the group partners up with smaller studios such as Peter & Sons to create exclusive content for its players. Hammer of Gods, a Norse themed game, went live at Yggdrasil-powered casinos this week. It works off Yggdrasil’s GATI technology which allows the vendor’s partners to create content easily and in line with the high standards set.

Stuart McCarthy, Head of Product and Programs at Yggdrasil, said: “With a distinct graphical style, immersive gameplay and giant win potential, Hammer of Gods is another thrilling Peter & Sons addition to the YG Masters portfolio.”

“It has been a hugely rewarding relationship so far, and we can’t wait to roll out Hammer of Gods across our operator network.”

Yann Bautista, Business Development Manager at Peter & Sons, said: “Our games have been well received by Yggdrasil partners with every new release, and we’re delighted to launch Hammer of Gods.

“With Wilds, Multipliers, Special Features and enormous wins, it combines plenty of fantastic elements and we’re eager to see how fans react.”

What’s Hammer of Gods Slot All About?

Hammer of Gods is the latest collaboration between Yggdrasil and the Armenian-based Peter & Sons.

In July this year, the parties launched Robin – Nottingham Raiders, which is the second title featuring Robin Hood and his legendary band of merry men. The game is a sequel to the highly popular Robin – Sherwood Marauders which went live earlier this year. According to McCarthy, Robin – Nottingham Raiders “features a quirky ye Olde English soundtrack, outstanding aesthetics and exciting gameplay, which combined delivers a great experience for slot fans.”