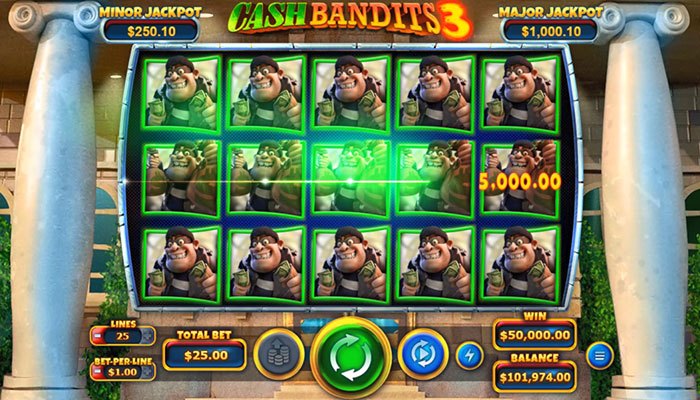 Everyone loves a cops ‘n robbers themed game, and no one does it better than the software giant, Realtime Gaming. One of the best slots series found at online casinos that cater to South African players is the group’s Cash Bandits collection of games.

Cash Bandits 1 & 2 are among the most popular video slots at sites such as Springbok Casino. It’s no wonder, then, that the industry is buzzing with the news that we’re soon going to be playing Cash Bandits 3, thanks to a new release by RTG.

It’s time to whip out your diary, turn to June 22nd and write in big, bold letters: “CASH BANDITS 3 COMING TO SPRINGBOK CASINO.”

South Africa’s favourite online casino couldn’t wait to share the news with its regular players about the latest expected game launch, and a press release was already put out this week about the upcoming release.

“The Cash Bandits might be the bad guys but the whole collection is great, and we’re delighted to catch the third instalment here at Springbok Casino,” noted the manager of Springbok Casino, Daniel van Wyke. Real Time Gaming have come up with yet another hit, and we know our players are going to love getting to grips with the latest game.

About the Original Cash Bandits Slot

Launched in July, 2015, the first Cash Bandits game became an instant hit among players. They were attracted to its fun, animated characters, its excellent graphics and sound, and its popular theme. Cash Bandits slot is a 25 pay line game with a crime heist theme. Symbols in the game include the policeman, the robber, a vault, handcuffs, megaphone and bag of loot.

The Cops & Robbers Badge is the scatter symbol, while the Vault is the wild. Land three or more scatters to trigger the Vault bonus feature, where free spins are up for grabs. One of the most attractive features of Cash Bandits slot is the fact that it has two progressive jackpots – a minor and a major one. These jackpots are hit totally randomly.

In the summer of 2017, RTG upped the ante by launching a sequel to the original Cash Bandits slot. Cash Bandits 2 boasts immaculate reel play and is jam-packed with lots of detail and excellent design. Crack the code and you could be on the run with up to 100 free spins and a magnificent multiplier! You’re looking at a top cash prize of 5,000 coins and loads of entertainment!

And now we’ve just got word that Cash Bandit 3 is set to make an appearance at Springbok Casino on June 22nd. Players have waited patiently for 3 years but it seems that the wait has been worth it. The third installment of this series incorporates all the charm of the previous two games, but has some incredible new features to make it feel fresh and current.

Some of the features of Cash Bandits 3:

✔️ Opportunity to win up to 390 free games with x 23 multipliers.

✔️ Progressive jackpot that can be randomly hit.