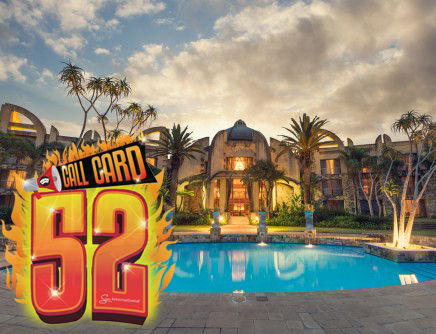 Last week, the KwaZulu-Natal Gaming and Betting Board ruled that the Durban-based casino may introduce Call Card 52,making it the first casino in the world to incorporate the game into a formal gaming environment.

The parlour game is thought to have reached South Africa’s shores from India, when the first ships from the region made the long voyage in 1860. Sibaya Casino calls it “the casino version of a very popular local informal game called “52”. “It’s an easy game to learn and great fun to play,” says the casino. “Visit the Call Card 52 games room at the main entrance and ask one of our dealers how to play, we bet you’ll love it!”

The General Manager of Sibaya Casino, Myan Moodley, said that since the game reached South Africa, “it has not looked back.” “The game is flourishing, particularly in townships of KZN. Hence our reason for bringing it onto the floor,” he said.

Sibaya Casino runs the Call Card 52 tables twice a day. The casino has applied to patent the game on behalf of Sun International. The gaming manager of the casino, Robin Kennedy said: “Owing to the fact that this is a new game, we chose to do a soft launch, but the results are already very good.” “The take-up is huge, particularly on weekends and word of it is moving fast throughout the province.”

Sibaya has two Call Card 52 tables set up – one with a minimum bet of R100 and the other a minimum R200 bet. To join in the fun and discover the casino version of Call Card 52, visit the games room at Sibaya Casino and ask one of the dealers how to play.

How to Play Call Card 52

Kennedy said that over the years, the popularity of the game among local players was brought to his attention, and he jumped at the opportunity to patent it and legalize it through the South African gambling authorities. “The entire process took eight months. We initially had to patent the name and then lodge the concept with the board. Fortunately, they were very amenable and received our proposal positively,” he said.

The Betting Board warmly welcomed the opportunity to approve the new card game after regular checks were done on its odds and fairness. “Approving a new card game doesn’t happen every day,” said the CEO of the KwaZulu-Natal Gaming and Betting Board, Portia Baloyi. “We wish them the best of luck with Call Card 52.