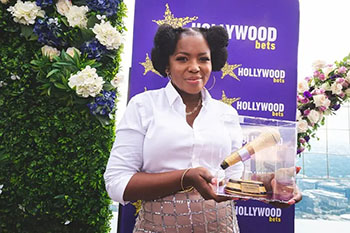 Tshabalala, a broadcast veteran of 20 years, has been involved in many of the biggest sporting events in the world. Some of her notable achievements include being the first African female sportscaster to host the Ballon d’Or Awards in 2010, while she was also SuperSport’s anchor for the FIFA 2010 World Cup Tournament with fellow Hollywoodbets Brand Ambassador, Robert Marawa. Tshabalala is currently a live studio anchor for the DStv Premier League and also covered the AFCON tournament. Her sterling work in sportcasting was recognised when she received the 2021 Soccer Africa’s 20th Anniversary Award.

The two brands have formed a solid foundation already, having worked together on the successful announcement of Hollywoodbets as front-of-jersey sponsors for Brentford Football Club in the English Premier League. They share a common passion for the development of women, as well as for investing in the community, which led to the #EmpoweringHER campaign alongside starlet Nomzamo Mbatha, last year, which aided 21 female-owned businesses.

Speaking about the new partnership, Tshabalala said, “It is hard to describe in words how excited I am to begin this beautiful journey with Hollywoodbets. Over the years, I have seen how the company has grown to be the leading betting operator in the country and has now become a rising force in the sports betting field on a global scale. Hollywoodbets has its heart in making a positive difference in their communities through various initiatives and the Hollywood Foundation. As someone who is passionate about women empowerment, becoming a brand ambassador for Hollywoodbets was the next step in our growing relationship and has shown how powerful this partnership can and will be,” Tshabalala said.

Sandisiwe Bhengu, Hollywoodbets Commercial Manager, said, “Carol is a trailblazer and a titan in the South African sports industry and with her star power still rising on the continent and globally, Hollywoodbets is proud to welcome her as our latest Brand Ambassador. We view this partnership not only as the perfect alignment of two rising stars in the global sports arena, but also as a vehicle of hope in improving the lives of many South Africans through various CSI initiatives that we aim to implement with Carol.”