December 1, 2020 Johannesburg, South Africa (Press Release) – South Africa's Springbok Casino has hundreds of casino games, all played in Rands. New games that debut each month are always popular but this year the five most popular games have been player favourites for years. The five Most-Played Games of 2020 are: Sweet 16, Cleopatra's Gold, Plentiful Treasure, Ghost Ship and Achilles.

"Sometimes a game is an instant hit and others become classics," said Springbok's manager, Daniel van Wyke. "Either way, great payouts, appealing graphics and special bonus features seem to be what makes a game a player favourite." 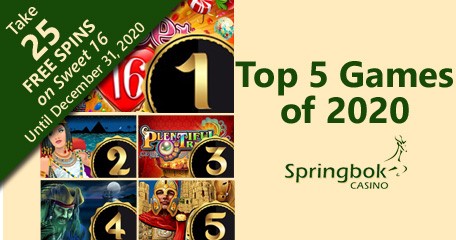 For the second year in a row, Springbok players' favourite game is Sweet 16. It's candy shop theme and progressive jackpot have made it players' first choice. It also has a free spins bonus round where wins are multiplied up to 20X.

Cleopatra's Gold, which also has a progressive jackpot, moved from #3 to #2 this year. Paying out for as few as two-of-a-kind, its Pyramid scatters can trigger 15 free spins where wins are tripled.

Legend has it that the Flying Dutchman sank off the coast of Cape Town in the 16th century and that it has been sighted many times during wild weather. The ship's bell continues to toll in the Ghost Ship slot which is fourth on this year's Top 5 Games list.

Achilles has been around since 2012 but is new to the Top 5 list this year. Set in ancient Greece, its Wild can grant up to 25 free spins and its progressive jackpot can be hit at any time. Until the end of December, players can take 25 free spins on Sweet 16, the most-played slot game of 2020.