June 1, 2021 Johannesburg, South Africa (Press Release) – Postponed from last summer due to the pandemic, the Euro 2020 Championship is finally set to begin June 11th. This month, South Africa’s Springbok Casino takes a look at some of the main contenders for the 2020 title.

"South Africans love their football, that’s for sure!" said Springbok's manager, Daniel van Wyke. "We may not have a team in this tournament – but we'll be watching!" 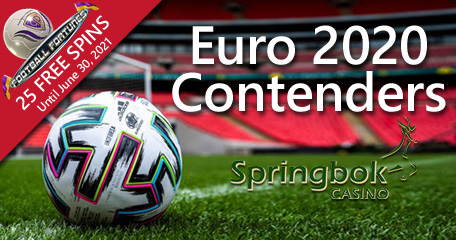 England has qualified for every Euro tournament but have never quite lived up to their fans’ expectations. This year, they’re in top form and hungry for a win. Team captain Harry Kane, their main goal scorer, will be key to their success. Bookies are giving odds of 11/2 for an England win.

Germany has lots of talented young players as well as experienced players to send onto the pitch. However, they’re in the “group of death” and will have to beat France and Portugal to make it into the next round. Odds on a German win are 8/1.

France has won two EURO Championship titles and, fielding a team brimming with talent, definitely has a chance at doing it again this year. Bookies are giving them an 11/2 chance of winning.

Despite having a long history in the competition, The Netherlands hasn’t won a European Championship game since 2008. With manager Frank de Boer’s patchy record of leading teams to a win, a question mark hangs over them this year. Odds for a Netherlands win are 14/1.

The Spanish team is favoured to win their group but will have a few tough games against Poland and Sweden. With captain Sergio Ramos and defenceman David de Gea, they are definitely in the stakes to take the Championship. Odds on a Spanish win are 9/1.

Football Fortunes is a fast-paced new game with two gameplay modes: Rhino and Fortune. In Rhino Mode, Scatters trigger up to 100 free spins with 3X multiplier. In Fortune Mode, any spin can trigger up to 8 free spins. During free spins, Bonus Balls trigger the interactive Penalty Kick Bonus Game where players take shots on goal and win prizes for every successful kick.

South Africa's favourite online casino, Springbok Casino has hundreds of slots and table games from Realtime Gaming. They’re all played in Rands and customer service available in both English and Afrikaans.