“Once the largest land mammal on our planet, rhinos have been here for 50 million years,” said Springbok Casino manager, Daniel Van Wyke. “If they appear rather prehistoric, that’s because they are!” 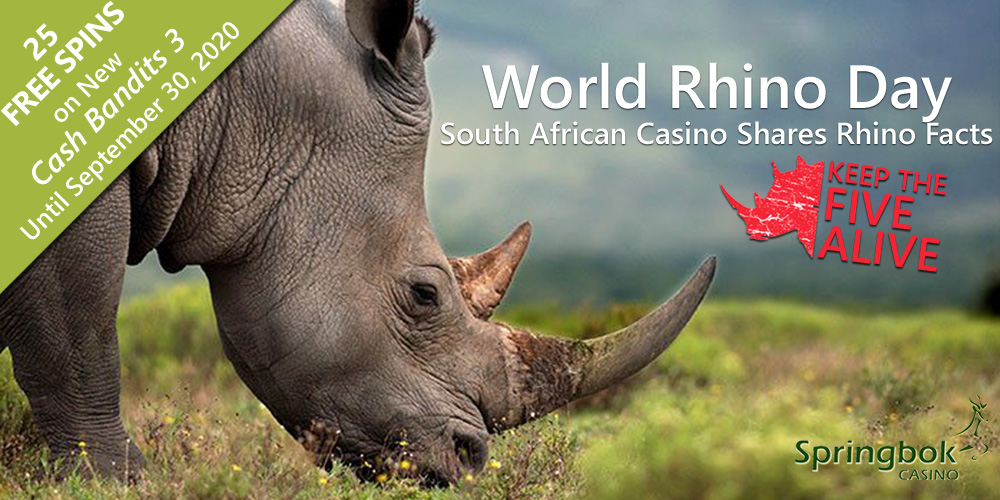 Springbok's Rhino Facts page explains the differences between White and Black Rhinos (hint: it’s not their colour) and discusses the Myth of the Rhino Horn. (Although it’s been used as medicine for 2000 years, it actually has no healing properties.) The page also has information on rhino orphanages where babies that have lost their mothers to poachers are raised until they can be returned to the wild. Until the end of September, players can take 25 free spins on one of the casino’s newest slot games, Cash Bandits 3.

Bungling but loveable bank robbers and rewarding bonus features have made the Cash Bandits slots some of Springbok's most popular games. Making its debut just last month, Cash Bandits 3 sequel sees the return of the bandits and has new features destined to give some big payouts. Scatters trigger free spins where all wins are at least doubled. During the Vault bonus feature, players can win up to 390 free spins and up to 23X win multiplier. The game's progressive jackpot can be randomly triggered after any spin.

With hundreds of slots and table games, all played in Rands, and customer service available in either Afrikaans or English, Springbok Casino is South Africa's favourite place to play real money online casino games.