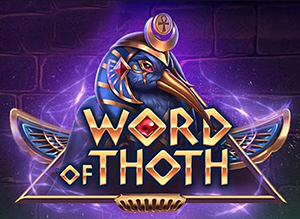 The online casino software vendor, Yggdrasil has joined hands with Jade Rabbit Studio to roll out a new video slot game, Word of Thoth. The game takes players on an exciting adventure into Ancient Egypt in a bid to dig for treasure. South African players can try out the new game at all online casinos that carry slots by Yggdrasil.

Word of Thoth slot is the first release by Jade Rabbit Studios in partnership with Yggdrasil’s YG Masters brand. Jade Rabbit Studios was founded in 2018. Its team of creators, developers & designers creates some of the best video slots in the market for top-tier brands. The company has committed to develop 12 games per year 2021.

What Does Jade Rabbit Studio Say?

The managing director of Jade Rabbit Studio, Roger Admeusspoke about the rollout of the new game.

“Word of Thoth brings plenty of fun to the reels with a popular theme, cascading wins, big multipliers and numerous ways to trigger the bonus round,” he said. “We’ve strived to give players an immersive experience and we can’t wait to see how they react.”

What does Yggdrasil Gaming Say?

Stuart McCarthy, the Head of Partner Programs at Yggdrasil, said: “Our partner program continues to produce engaging titles and we’re delighted that Jade Rabbit’s newest hit, Word of Thoth, has been rolled out smoothly through the YG Masters program.”

“We’re dedicated to giving boutique studios a clear avenue to success and we are hugely impressed with the performance of our partners so far.”

Last month, Jade Rabbit Studio proudly announced the first release of a series of bespoke games created in collaboration with Kindred Group. Wings of Hermes slot has a 95.36% RTP and is fully compatible for desktop and mobile play.

“The level of their expertise and professionalism during the production process made creation of this game an exciting and valuable experience. We're looking forward to releasing more thrilling slot games throughout 2021 and beyond,” he said.